« Ahhh, of course I should know that "An unspecified error occurred (696e647863686b2e 9cb)" actually means "hey, your USB disk is drawing too much power from the USB-port"! | Main| Do your server send mails asking for e-mail confirmations? Then ensure the receiver knows which domain the confirmation-mail origin from! »

Whilst my laptop do have a nice web camera, I wanted a web camera right in front of my face on the external screen. Why? Twisting my neck hard left to make occasional eye-contact with the laptop web camera was very tiring for my neck.

Read on to see how I ended up with an old iPhone 8, running the app EpocCam Pro, mounted on a Gorilla Pod, like this; 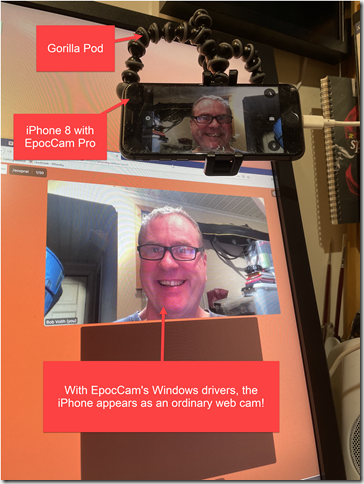 Note the “lowered mode”, where my web camera now is almost in eye-height

I could of course run into my nearest hardware-shop and purchase a new web-camera too, but was set off somewhat by expensive cameras and relatively low specs.

Then it struck me, is it possible to set up an old iPhone as a web camera. Searching Apple’s App Store I found several “turn your iPhone into a web camera”-applications. Searching the net also revealed several tests of the applications, such as this one. One app that seemed to get nice reviews was EpocCam from Corsair Components, Inc.

First, install their downloadable driver in Windows, install the app on the iPhone, and after a couple of clicks, you web camera is up and running.

This was one of the “install and run with great success” experiences.

At first I mounted my iPhone-web camera on to of my screen with a Gorilla Pod with an phone-mount, but that position was also tiring for my neck. Additionally my colleagues had to watch my soon-to-be-without-hair scull most of the time. By lowering the iPhone with the Gorilla Pod as shown in the picture, my web camera is now very much in the same height as my eyes. Great!